PDN did a interesting survey of former white house photographers recently, exploring how the role and the photographs which result from it effect the country’s perception of a president. They then gave their thoughts on how the next first family might take advantage of the impact of photography. Here are some select quotes. The full article and photo gallery can be found here.

“The President and First Lady can set the tone. You have to keep in mind that if you’re willing to be followed occasionally you’re giving the country the opportunity to see how you are. Is it absolutely real? No, of course not, because they know you’re there. But it’s as close as you’re going to get.” – Diane Walker 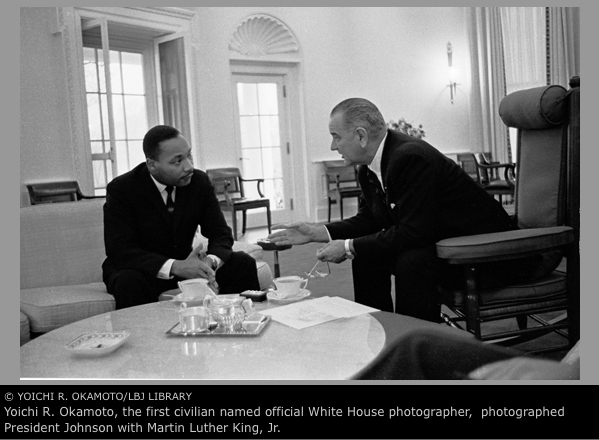 “How you present a president is very important. “Mission Accomplished” was the biggest gaffe in years.” – Diane Walker

“The president doesn’t have to be friends with the photographer, but they certainly have to trust and know him or her well enough to give that person essentially unfettered access to the oval office.” – Pete Souza

“You’re talking about a human being [Johnson] who is so much more human when you see Okamoto’s photographs. Those pictures tell me that that man went through hell, and the sympathy I have for him I can thank Okamoto for. That’s the job of the official photographer.  His job isn’t to supply us with pictures, it’s to tell history what this person went through.” – Diane Walker

“If Obama is elected, he has two small children. The Obamas could take a page from the Clintons’ book. They made a certain pact with the Washington press corps. The Obamas could say: We’ll let you have an open photo opportunity when the girls go to the school for the first day, then after that, don’t photograph them unless they’re with us. It was amazing how everyone showed up to see Chelsea Clinton walk into the door of Sidwell Friends School and that was it. If we saw her walking with other girls, we didn’t photograph her.  If they [the Obamas] decide it would be nice for the press to have a picture of the girls on the south lawn or in the Oval Office with him, more power to them. If you do that, you take away the desire for it, and the press isn’t always nagging for it.” – Diane Walker 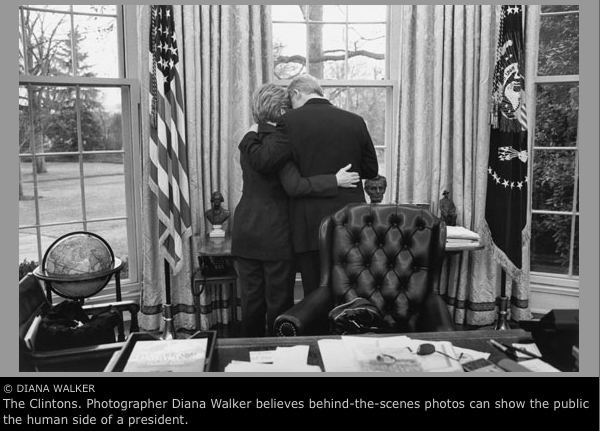 “The current administration has been a confetti machine of hand-outs. They have, in my estimation, tried to supplant outside photography by releasing photos almost on a daily basis of stuff that other photographers should be able to cover. That doesn’t include classified meetings – I understand that. But the more photos the White House releases, the less valuable they become, and the more suspect they become.” – David Hume Kennerly