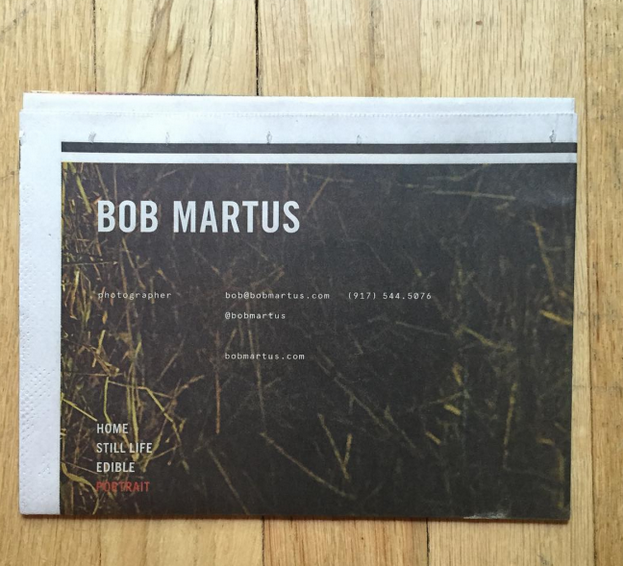 Who printed it?
Linco Printing in Queens, NY

Who designed it?
Michael Freimuth, Creative Director and Partner at Franklyn did the design work.  We wanted to go big with the images and keep everything else minimal.  For this particular piece, the newsprint and the brown grocery bag paper envelope worked perfectly with the imagery.

Who edited the images?
The images originally came from a story I shot that ran in Men’s Health: so the edit credit really should go to Don Kinsella the Deputy Director of Photography over there. Great guy and a pleasure to work with!

How many times a year do you send out promos?
Generally speaking four times a year. I try to hit seasonal themes or send out a series of teasers on one subject. The images came about from a story was called Raise your Steaks in Men’s Health – basically about buying potion of a cow.  The meat shot represented everything you get from 1/8th of a cow.  First we photographed a Scottish Highlands cow in Rural Pennsylvania, named Raquel.  She was the farms show cow, winner of many a blue ribbon.  The farmer sent everyone in my crew home with some of the best beef I’ve ever had. It was a pretty amazing juxtaposition the to then photograph the meat still life.  We did the corresponding recipe shots in studio the next day.  Prop styling by Thom Driver and food styling by Jamie Kim.

View all posts by Glasshouse Assignment